Nearly 3 million Ontarians are employed by small businesses of 100 or less employees, but the rising cost of doing business in the province is stunting their growth. 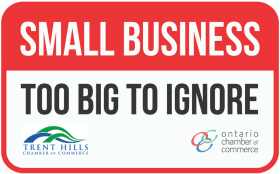 Today, the Trent Hills Chamber of Commerce, in partnership with the Ontario Chamber of Commerce (OCC), is launching Small Business Too Big To Ignore, a six month campaign that will highlight the important contributions of small businesses to our communities and investigate the top barriers to small business growth. Coinciding with the launch of this campaign, the OCC also released its report, Top 3 Obstacles to Small Business Success, aimed at starting a conversation about the underlying challenges that are weighing on small businesses and stifling job creation.

In the report, the OCC cites the rising cost of doing business as a major impediment to small business growth. In fact, OCC survey results show that one in twenty businesses in the province expect to close their doors in the next five years due to rising electricity prices. In addition, 38 percent will see their bottom line shrink, with the cost of electricity delaying or canceling investment in the years to come.

“Rising electricity prices is just one of the many elements adding to the cost of doing business in the province,” said Jeff Hamilton, Chair of the Trent Hills Chamber of Commerce. “The Chamber is launching this campaign to take a look at how we can mitigate these types of costs by engaging both government and business leaders in a productive conversation to the answer the question ‘what exactly is ailing small business?’.”
In addition to the rising cost of doing business, the report also lists key infrastructure gaps and a lack of access to skilled workers as the top three obstacles weighing on small business. According to a recent OCC survey, 39 percent of employers have had difficulty filling a job opening over the past year and a half – an increase of 11 percentage points since 2014.

“Finding skilled workers has been a challenge for Trent Hills employers and continues to be one of the Chamber’s priorities for advocacy,” said Mr. Hamilton. “The OCC has made tremendous progress on this issue, and yet there is more work to be done. The need is greater than ever to match skilled workers with employers.”

Over the next six months, local chambers of commerce and boards of trade will hold consultations with small business owners throughout the province to identify the barriers that they face.

“As the voice of business for Trent Hills, we are pleased to partner with the OCC on the Small Business Too Big to Ignore campaign,” added Mr. Hamilton. “While the average size of our Chamber Members is much smaller than 100 employees, the top barriers to businesses are similar. The consultations with business owners will clearly identify the challenges they are facing and provide the Chamber network with valuable information to advocate on their behalf.”

“Small businesses of 100 or less employees are the core of our membership and employ nearly 3 million Ontarians, which is why we’ve decided to undertake the Small Business Too Big To Ignore campaign,” said Allan O’Dette, President and CEO of the OCC. “The insights gained from the local chamber consultations will form an upcoming OCC report to be released during Small Business week in October 2016. We’re really looking forward to the feedback.”

Thank You to our Title Sponsors!

Thank You to our Gala Sponsors!

Thank You to our Event Sponsors!